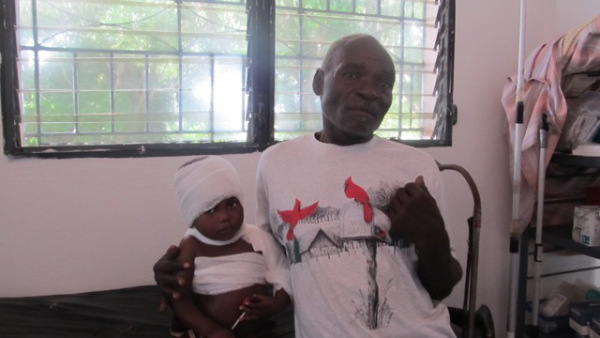 Our first few days have run very smoothly and, again, I have been impressed to see how a group of people, most of whom do not know each other, have quickly bonded and learned to work together as a team.

This proved to be particularly important on Day 2, when we got several rather difficult and people-intensive cases in a row. The most heart-breaking was a three-year-old boy brought in by his grandfather. He had fallen into a hot cooking kettle and had serious burns over a good part of his back and head. The providers and nurses worked on him for the better part of the day, and will be seeing him every day for the rest of clinic.

I talked with the grandfather a bit today and he kindly allowed me to take some pictures of him and his grandson. He told me that the boy’s mother had died and that most of his (the grandfather’s) kids lived far away, so he was largely responsible for the boy. Despite the fact that this little guy, Makenzie, must have been in a great amount of pain, he was happy to have his picture taken and to see himself on the camera.

I’m here as a non-medical volunteer and my duties mostly involve greeting the patients and finding their dossiers (patient charts), as well as odds and ends like doing laundry. It’s certainly not the most important job here, but I hope that greeting the patients, playing with the kids and handing out toys does a little to make their day better.