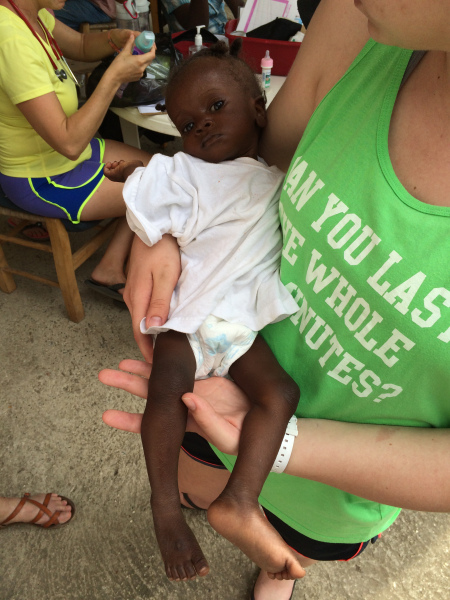 FOTCOH first met little baby Makenlove on Friday, May 15th when he was seen during the first week of the May 2015 clinic. He was 14 months old and weighed only 8 pounds and 11 ounces . . . smaller than some newborns. He had no cry and was a skeleton. He was starving. He could not hold up his own head. He laid limp in our arms.
Mom had four other children at home age 12, 14, 15, & 16. He stole the heart of many volunteers that day as we were all in awe of his small size. Too weak to be able to chew and swallow the thick Medika Mamba (nutrient-dense peanut butter medicine given to severely malnourished children), we gave mom an entire bag of formula and infant multi-vitamin drops that day.
As a returning team member on the following clinic in July, Makenlove was one baby I was looking forward to seeing again, and many members of the former May team wanted an update on this little babe!
Friday came and went and I did not see him. The same for Saturday.  Monday, Tuesday, and Wednesday all went by and I had not yet seen this little baby.
Wednesday night my heart and head were heavy, wondering what had come of him.  I knew Thursday would be our last chance to see Makenlove during our July clinic. I did not want to leave Haiti without knowing how he was doing.
Thursday morning I selected all of my return to clinic cards from both adult and child patients and Makenlove was not there. Just before 8:30am that day, we went out to the crowd to make our final patient selections for the last day. There was still no return card for Makenlove.
On the last day of clinic, I wanted to select the patients that we could help the most:  pregnant moms, newborn babies, draining ears, head full of tinea (fungus), frail elderly, infected scabies, and tiny children that could qualify for Medika Mamba.
With my decent amount of learned Creole, I asked a mom holding a small child how old he is. She answered “sèz” (for 16 months) and I directed my non-medical volunteer to put a bracelet on this baby.  I went back inside the gate to the provider area where I saw several more patients over the next hour.
As the designated Medika Mamba provider for our team, I motion to our clinic staff that I will see that baby next, as I assumed he would qualify. Now that I am face to face with this baby and his mother at my table, I recognize this baby from a previous trip, however the name on the dossier (patient chart) is not Makenlove. I was confused and felt something was not right. I completed the exam and measurements and began the paperwork to begin this child on Medika Mamba. One part on the Medika Mamba record asks to record the name of the parent. My interpreter asks mom to spell her name and the name she spells is the name on the dossier. So if the name on the dossier is mom, then what is the baby’s name??   It was Makenlove this entire time!  Instantly I was so happy to see that this baby, while still tiny, has more spunk than prior and enough strength to palate our Medika Mamba. Mom lost her return to clinic card and did not remember what day she needed to come to clinic. When she arrived at the dossier line she gave her name, not the baby’s name.
While I was overjoyed that this baby was still alive and doing much better than he was   in May, I had fears of what would have happened had he not been selected that morning, or if mom did not come until Friday and clinic was over for the month.
After two months of formula, baby Makenlove was up to 9 pounds 12 ounces. He gained a little over 1 pound in two-months. He can sit up and has started creeping. He now has enough oral motor strength to be able to eat two packets of Medika Mamba each day.
He will return to see our Haitian physician at FOTCOH in five days to be weighed and refill his supply of Medika Mamba. I can’t wait to hear from our September team how this baby is doing!!
Just the small gesture of giving formula and vitamins has given enough strength to this baby to qualify for Medika Mamba.  And very soon he will  no longer be described as malnourished, but as a healthy, thriving baby boy, thanks to FOTCOH and its devoted medical providers.